The pig yard really needed help.  Jon knew he needed to separate the male from the females and the female mamas from the other females and from the young weaned piglets .  They had all lived together in an area where there is a natural spring so water and mud and vegetation are available year round.  Things were a little scarce in the summer, but still adequate.  But as our pig population has grown and continues to grow we needed some major changes.

Then in the middle of the olive harvest, a mama pig had a litter. The mama squished a few in the night as she slept, and the eagles had a few for dinner, and then mama abandoned the last two. One little one died, but the other I was able to rescue.  The small chicken house became the piglets home.  I took it milk and food and gave it scrap wool to nest in.  It liked to be held and have it’s head scratched.  It grew.  It took to scrounging in the dirt and trying to eat anything it could.  It came when it heard voices or the sound of the dog collars jingling and would talk at everyone.  Even our guys liked to scratch the piglet and talk to it.  We had a pet piglet!  I can now totally understand why someone would think a pigmy pig would be a delight.  But, when our little guy got big enough and was tearing up the chicken yard and went under the fence to the rooster area and ate everything in sight, it was time for him to go home.  The guys took him back to the pig yard.  He is doing fine.

Jon had a plan and the guys were beginning to construct fencing when the pig yard turned into a lake with the heavy rains of our early winter.  Luckily, there were high places for them to get out of the flow of the water, so no harm done.  The first issue was to get the feed out of the mud.  They built a raised platform to set everything on.  It will eventually have a roof and sides; it is a work in progress.

The guys built new fencing to separate the old pig yard into four new separate yards.  Also a new yard was built at the bottom of part of the olive plantation that is really too wet for the olives but ideal for the pigs.  This new area is used for the weaned piglets.  Here is the view of the new pig area.

We can walk and get the truck between each of the pen locations.

The pig yard is located next to a creek and a lake between our two varieties of olive tress, so they are in the back part of the farm on the other side of a hill from the houses.  Which is why I probably think they are so cute.

We did send our first set of piglets to freezer camp awhile ago, and the next set too.  We have been enjoying having pork.  It is harder to find in the butcher stores than one might expect.  Pork is very popular around the holidays but not so much the rest of the year.  So here are pictures of the guys having a good time working together first preparing and then enjoying the first home grown pork asado.

It was a nice afternoon to celebrate a job well done.

Our little piglets are growing bigger and bigger.  In about two weeks they will go to freezer camp.  YUM! Suckling pig is big here in Uruguay (as one acquaintance put it, think roast piglet with an apple in their mouth and you’d have the right idea).

Our newest set of piglets are just as cute as the first, but their “daddy” keeps others away.  There are 11 in this litter of all colors.

They are so cute and curious. And will hopefully taste great when their time comes as well!

We purchased some pigs in December.  They went into the back pasture where there is a natural spring, so that no matter how dry it got, they would have access to water to cool off.

On routine feedings one of our females looked to be growing much larger than the others and Jon told our workers that she must be pregnant.  Oh, no, Jon was mistaken; he didn’t know anything about pigs.  The day she delivered, Jon practically yelled, “I told you she was pregnant!”

Our mama has 12 little piglets.  Alejandro did a fast math calculation of number of babies and the price of 5 week old piglets and came to the conclusion that we just paid for the purchase price of our pigs, any more babies would be profit.

This surprise birth was truly a surprise.  We are still waiting for a male for our herd.  Our animal broker had found us a large black male, but before he could close the deal and deliver, he had a motorcycle accident.  He was in the hospital for a few weeks and lost the opportunity. So despite missing half of the breeding equation, we have piglets.

We have once again added “a little of this” and will most likely turn into “a lot of that”.  When I made comment that this was the last addition to our menagerie, I was reminded that we still have not acquired our guinea fowl (but not for lack of trying).

So let’s begin our picture show with the delivery vehicle getting stuck, with the animals inside.  We have a collection of stuck vehicle pictures.  And no, the truck driver did not run over the sheep water trough, but almost.

After putting out the word that we were looking to purchase some pigs, and much discussion about the breed of pig we were willing to purchase, we got a call from an animal broker.  He had three Large Blacks and an Iberian.  So four pigs have joined La Piccolina.  The Large Blacks produce good bacon and the Iberian produces great ham, or so we have read.  An important ting for us is that they do not get sunburned.

In the back corral.

How can you not fall in love with the floppy ears and round snout?

Can you find the Iberian in the mud? 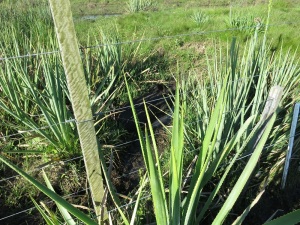 Now we are looking for an older male so we can have/eat/sell piglets.