The three water tanks which sit in the upper pasture are about a quarter of a mile up a small incline from the house.  A nice walk, but not all that close in inclement weather. The three 4000L tanks are essential in the day to day running of the farm – we can’t fill the animal water troughs or irrigate the garden without them. Which means we tend to obsess their fill status more than a little. In order to know how much water is in the tanks, someone has to walk up the hill, knock on the side of the tank, and listen for the sound change.  Full and empty have a different vibration sound and where the sound changes indicates the water level.  Sometimes we climb up backwards on the 7 wire fence which runs just behind them, balance carefully against the tank, twist the lid off, and look in just to make sure we’re reading the water level right.

We usually have the well pump run for 45 minutes, then let it rest and let the reservoir fillf back up for an hour and then run the pump again.  It takes about four times of running the pump to fill one 4000L tank, which we can empty quickly between the garden and the animals.

Jason has been listening to us grouse about the challenges of water management since we started the farm. He has done his level best to improve the situation every time he visits. In 2014 he made us an easy simple solution to “see” when the tanks were full:  a bopper that floated to pink duck tape when the tank was full. I just stood on the porch with binoculars and looked for the coloured tape.

It worked for almost two years.  We had to change out the cork floats, bend the inside float arm back into place, reposition the pvc pipe stand a few times, but it was nice not to have to walk up to the tanks and knock on them.

During this time, Jason was designing a new water control system for us:

The new measuring system is complicated, involved, time consuming, and, according to Jason, fun!

So this year on his working vacation, he brought the parts and pieces and began assembling them. 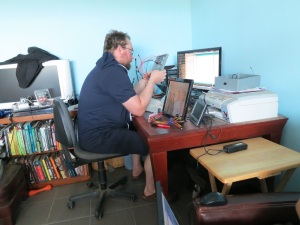 First item was to “program things” to talk to each other, then test it (this step repeated a bit), then explain it to his mother. 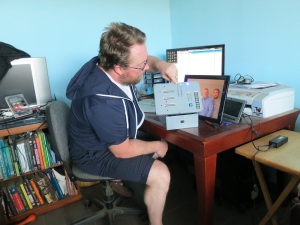 Finally, it was mounted on the wall, (under the weather station display), and now we can turn the well pump on, or off, for the time we want and monitor the time.  There are also bar lights to inform us how full each of the three tanks are, so we know our water levels.

(Yes, this is the kitchen table, and we do clear it for meals.)