We once again have goslings.  We have a years worth of experience plus a little more research and a lot more conversation.  So when our friend Graciela called and said she had some goslings and were we interested, of course we said yes.  So off we went with a cage in the truck, not a cardboard box like last year.

We collected a few more than expected and they were a little older, but not by much.  We brought the brood to the farm and created a section in the goose yard for the babies to stay and everyone could get accustomed to everyone. 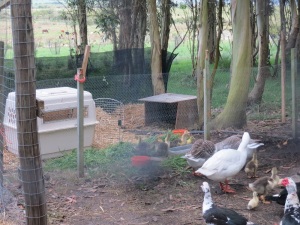 (Yes, that is our ever purpose dog crate to act as shelter for the goslings.) 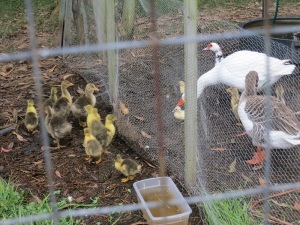 The adult geese were very interested, as were the babies.  About five days later, we opened the enclosure.  This is the goslings first excursion out of the enclosure.

They wander the campo as a flock and the adults are very attentive to the goslings. 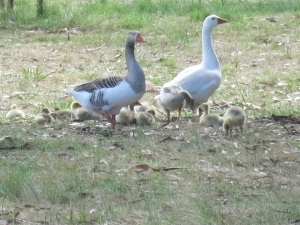 And while they are adorable to watch, they have discovered the front patio.

And now I get to scrub the patio and walkway every afternoon to get rid of what they left behind.

And even though there are no pictures, we have seven newly arrived goslings just today.  We had just taken down the enclosure for the goslings and were dreading putting it back up.  But as we took the cage out of the car, all the geese and the babies were hanging about making noise as were the new arrivals.  We set the cage down, opened the door, and the little ones went running to the flock.  The adults adopted these little ones right away.  What a pleasure to not have to do anything.