In between rain squalls we have managed to finish the bulk of the chicken yard remodel. Remodel you say? What remodel?

If you remember way back when Jason helped build (or built, depending on who you ask) the bulk of our chicken coop. Which we LOVE. But, as noted then, it wasn’t quite finished. Over time the feature list changed a bit and so while getting the last few things worked on we remodeled it a bit. After all, two years’ experience with the chicken yard has taught us a lot.

So, what did we do? We built another building to the South of the main coop and shrunk the size of the main chicken yard a bit by putting up an interior fence to create both a second, small chicken yard attached to the new building and an entryway. .

The second small building will be our incubator / brood house. We knew we needed to change the location of where to grow out our incubator chicks.  The incubators had been on card tables in the small, not quite finished (see the trend here? ) guest house. But they couldn’t stay there long-term (some day we’d like a finished guest house). So, we needed a place for the incubators to be that was connected to electricity, free of drafts, able to be kept warm, easily visible, and accessible.  After hatching, the baby chicks need to have a warm space they can move about in and have access to food and water. This part we did have – and it worked well – but it took up valuable roost space in the main chicken house.  What we were missing after the chicks fledged from this smaller, contained and warmed pen was a place for them to roam as they grow out a bit more. We had been just turning them loose into the general population but that wasn’t quite ideal. Yet they need to be able to go outside, but not compete with the larger chickens, while still be near enough to be seen and heard by the older chickens, which helps the chicks integrate into the larger, cohesive flock and not be so competitive as adults. So enter the brood house. 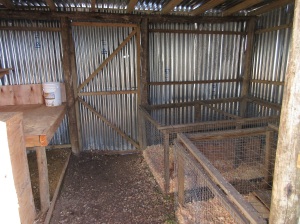 It is almost ready to go.  Still no electricity. Which really means it’s unusable. But for right now since we are in winter and it’s too cold to hatch chicks it’s not quite such a big deal. Give it a month and we’ll be scrambling for that electrical hook-up.

The space between the two buildings is our new entry area and a nice chicken free work space.  We used to have a small people door and a large double door. We found the large double door never got used and the small people door was too small. So we got rid of one door entirely, move the wall over so that only half of the large double gates remained and now have a very nice, wide, and usable people door. (The blue tarp is covering the mulch we use for net box materials, it will have a cover over it in the future.)

To further the remodel we also have put a floor at the entrance to the chicken house where we store the feed barrels and other supplies.  It had been several inches of mud with the deluge, so a definite improvement. The interior door separating the chickens from the feed and storage materials also got a nice tweak and no longer gets stuck in all the bedding litter.

We have a few little things left to do (as always) but the primary work is done. The drainage work is in progress (and when we get that done we’ll try and post about it. It might have to involve pictures, arrows, diagrams and a great deal of confusion) and until the winter mud has dried up we can’t finish a few thing. But otherwise, we are, once again, in love with the changes to the chicken yarn.

We’ve also made a few adjustments with regards to our chickens. In the heat of the summer egg production diminished, which is understandable considering this year’s heat. Quite a few farms had chickens dropping dead from the heat. But with cooler weather has not come increased egg production.  We haven’t been sure what to think. A neighbor, who also has chickens, shared she was not getting any eggs at all!  So that made us feel a little better, but not much. Combined with sub-par egg production was the crowded state of the chicken yarn. So one day we stood and counted bodies (several times, because counting moving chickens is an art form we have not yet perfected) – we had almost 175 chickens!  Way to many, and way too many to send to freezer camp at one time. So Jon, Margo, Alejandro, Oscar, and Ruben took colored chicken bands (little pieces of plastic which wrap loosely around the ankle of the chicken, perfectly harmless) and sorted chickens. Imagine five people, a building so full of bedding litter that the ceiling is now short, and 175 annoyed, squacking chickens. Take a moment.

Anyhow, after chickens got sorted into young, laying, old, and wrong breed, some got sent off to freezer camp and the rest went to the animal auction we went.  We got an O.K. price per chicken, and spent the profits on chicken feed.  We have noticed a big difference right away in the increase in eggs and a much calmer chicken yard!  Less food competition?  More individual space?  (The weather sure didn’t change.) Who knows, but I am happy and the chickens are happy. They’ll be even happier when we send the last few off to freezer camp. Just in time for new chicks.

S l o w e l y  we are getting things settled as we learn our way to being farmers.