Once again we were in the middle of a project and the tool broke.  Jon was using the roto-tiller to get the gardens beds ready for planting and the tines broke! 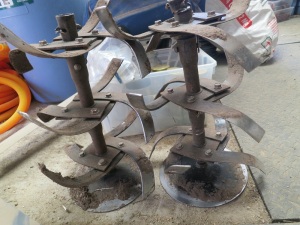 Look towards the top

So, after much discussion with several people, Jon just gave in and bought two new tines.  He said it is the best money he ever spent as these tines are so much better than the others.  It has made the work go faster.

2 thoughts on “Tilling away at the garden beds”